The American Cider Association’s CiderCon has gone virtual, giving cider producers and keen advocates from further afield a chance to join the world’s largest cider conference without having to shell out to traverse the globe.

Always held in late Jan/early Feb but normally in person, the ACA took the decision to go online early on. However, as you can see from the downloadable schedule , all of the best CiderCon characteristics are there.

Taking place 3-5 February, sessions fall into one of six different Tracks – themes – from Apples, Flavor & Terroir, to Cider Business Foundations. The chance to hear from the world’s leading practitioners is there again. Sessions that caught my eye include Factors to Consider When Making Sparkling Cider, on the Cider Production Track. Angry Orchard’s head cidermaker Ryan Burk is joined by among others Dr Belinda Kemp, noted oenological academic at Brock University.

What does being at CiderCon mean to regular attendee Tom Oliver? “Broadening the mind, searching for new horizons, and meeting fellow travellers,” he says. “‘You do WHAT with your cider?!!’ ‘You can’t sell from your Cidery?’ ‘You have a three-tier distribution system?'” All this and more make CiderCon so interesting and informative, and the contrasts and shared skills and hurdles are always fascinating.”

There’s a few familiar faces – of course! Gabe Cook is joining brilliant blogger, Meredith Collins, aka Along Came A Cider, for a Virtual Pub Chat, dissecting what exactly is “the UK flavour”.

Darlene Hayes – many will recall her Kingston Black Around The World tour de force at Ross Cider Club a few years back – leads the panel on Strategies for Creating a Successful Blend, including superstar Autumn Stoscheck, Eve’s Cidery (in UK via ReStalk) and Nicole Leibon, Silo Distillery. And James Forbes of this parish takes part in a Quince panel, along with Martin Berkeley, PIlton Cider, chaired by the peerless, Ria Windcaller, CiderChat. 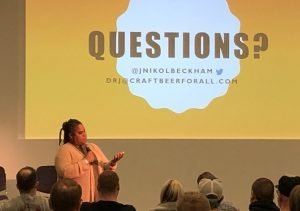 Cidermaking royalty Philippe Bishop of Alpenfire Cider joins surely one of the most talented cider advocates, Dan Pucci, fresh from the launch of Pucci’s book, American Cider: A Modern Guide to a Historic Beverage, to discuss Consumer Expectations of Single Varietal Cider and Apple Varieties. Krista Scruggs, Zafa Wines, is making a welcome return to appear on the Purposeful Co-Fermenationa panel alongside Botanist & Barrel’s talented Kether Smith and others.

And if you’re after modern marketing insight, check out Michelle Pagano, aka The Brew Babe, with Branding with Cider Influencers. 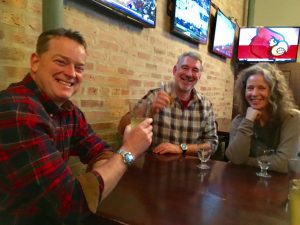 A veteran of a few CiderCons, Simon Day, chair of TCCPA,  is relishing attending this one “without the jetlag!”. “It’s an opportunity to learn, to exchange ideas, to meet old friends and to make new ones,” he says. “I’ve always come away from CiderCon feeling rejuvenated and full of new projects to trial in our cidery.  Whilst I’ll miss the face to face meetings and the big tastings, I am thoroughly looking forward to it. Given the low cost of attending this year, I hope there’ll be a few more faces from our part of the world too!”

Now this does cost money! Assuming no-one this side of the pond is an ACA member, it’s $195, with slight discounts for multiple registrants from the same cidery. But there’s two bits of good news – because this is taking place in Pacific Time, that’s 8 hours behind the UK, so starting 4.30pm our time, running through to c. 12.30pm.

And also the sessions will be accessible online after the event for attendees. So, that way you don’t have to angst as we do every year when impossible choices arise.

TCCPA members can join ACA Board Member, Sam Fitz, Anxo, after the TCCPA 2021 AGM on Monday 25 January, to hear, among other things, more about CiderCon. 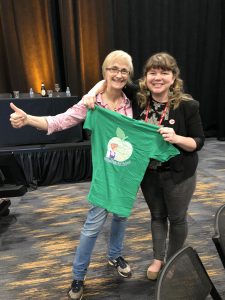 Read all about it

And look out for ACA executive director Michelle McGrath, pictured here accepting Cider Women’s t-shirt gift in 2020,  in her interview with Adam Wells in the cider column of Malt Review, on the afternoon of Saturday 23 January